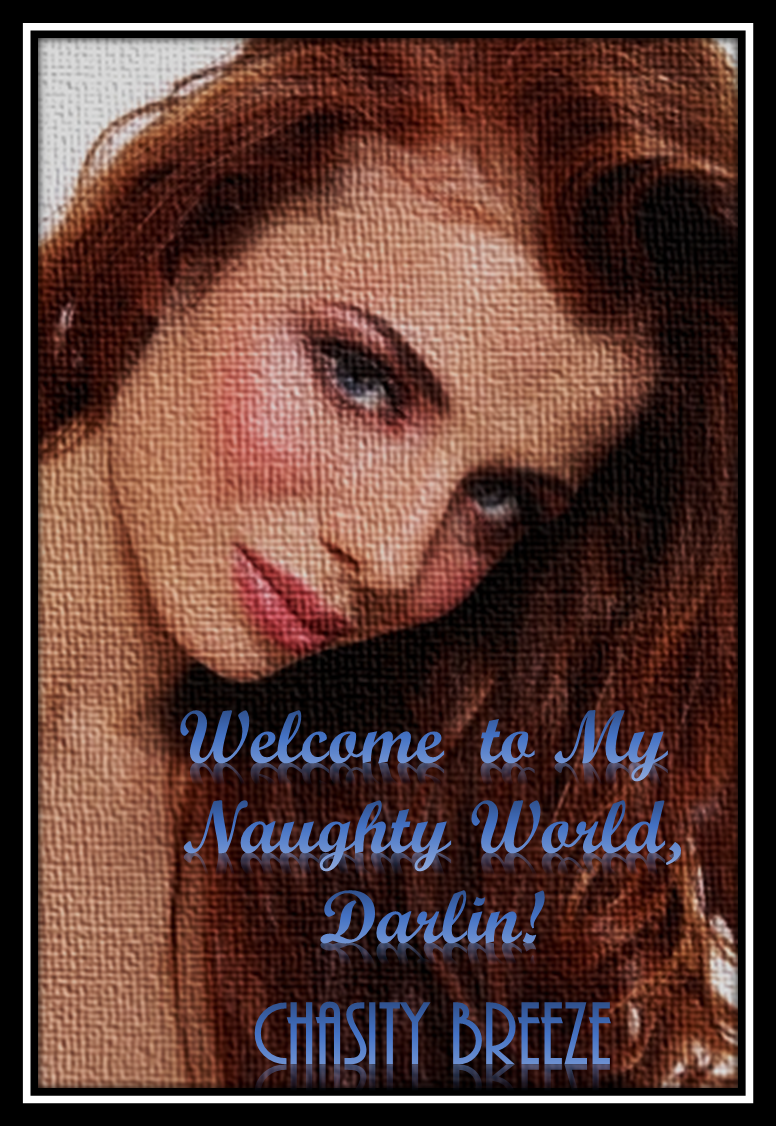 I hope you all haven’t missed me too much!

Okay, okay…I hope you have!!

I have been working on 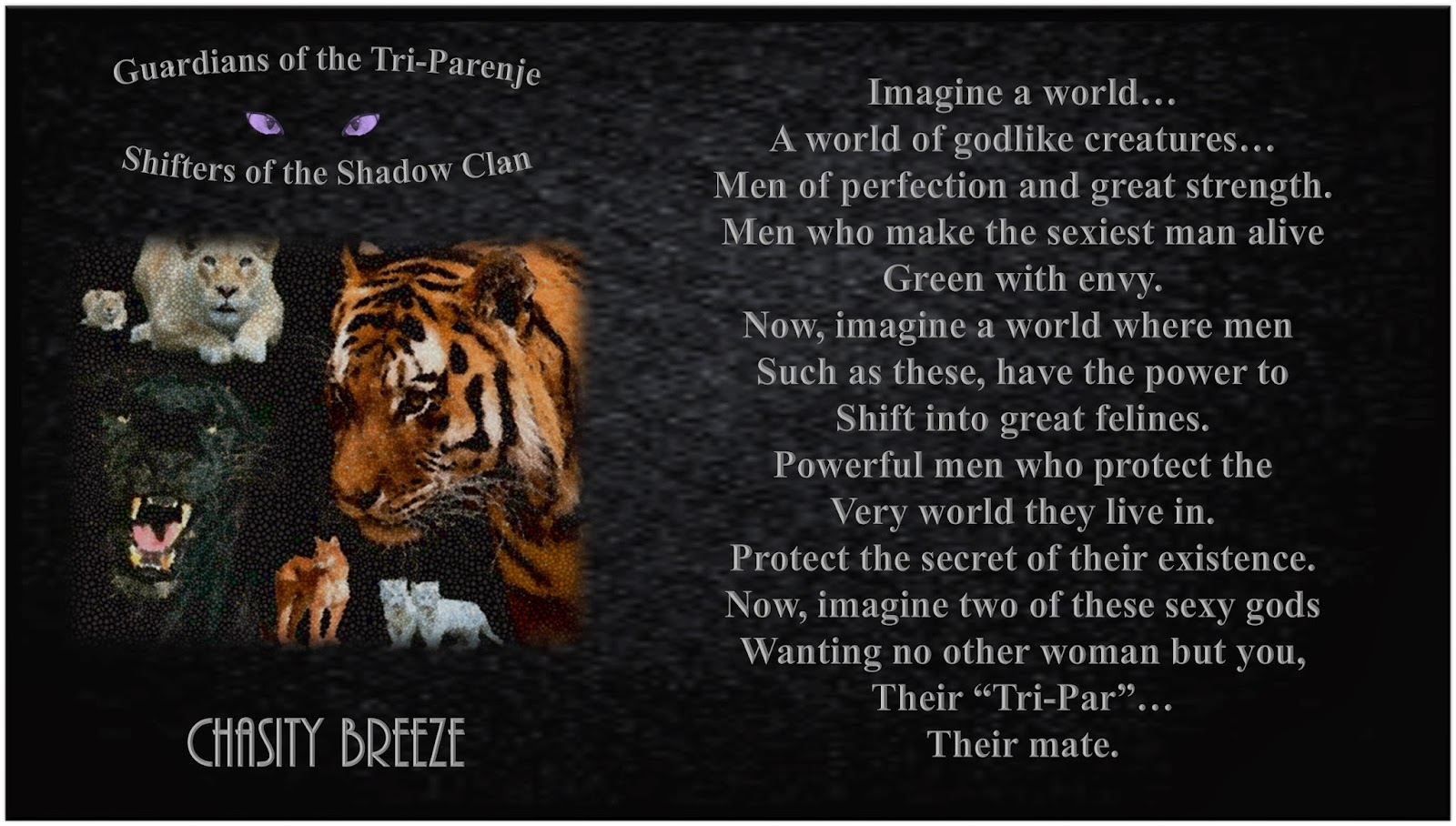 Let me introduce you to the world of the Guardians of the Tajna, which is what the Guardians are until the Tri-Parenje calls to a small group of the Guardians and their female mates, who are believed to be human…until Sloane Dasani appears as the first female to be mated with not one smoking hot Guardian, but two.

Kade O’Connell and Lincoln Merrick are two of the many Guardians of the Tajna, which means Secret.  The secret they are guarding is the world of Panthera shape shifters, or large cats.  Kade is Black Panther and Linc is Snow Leopard. 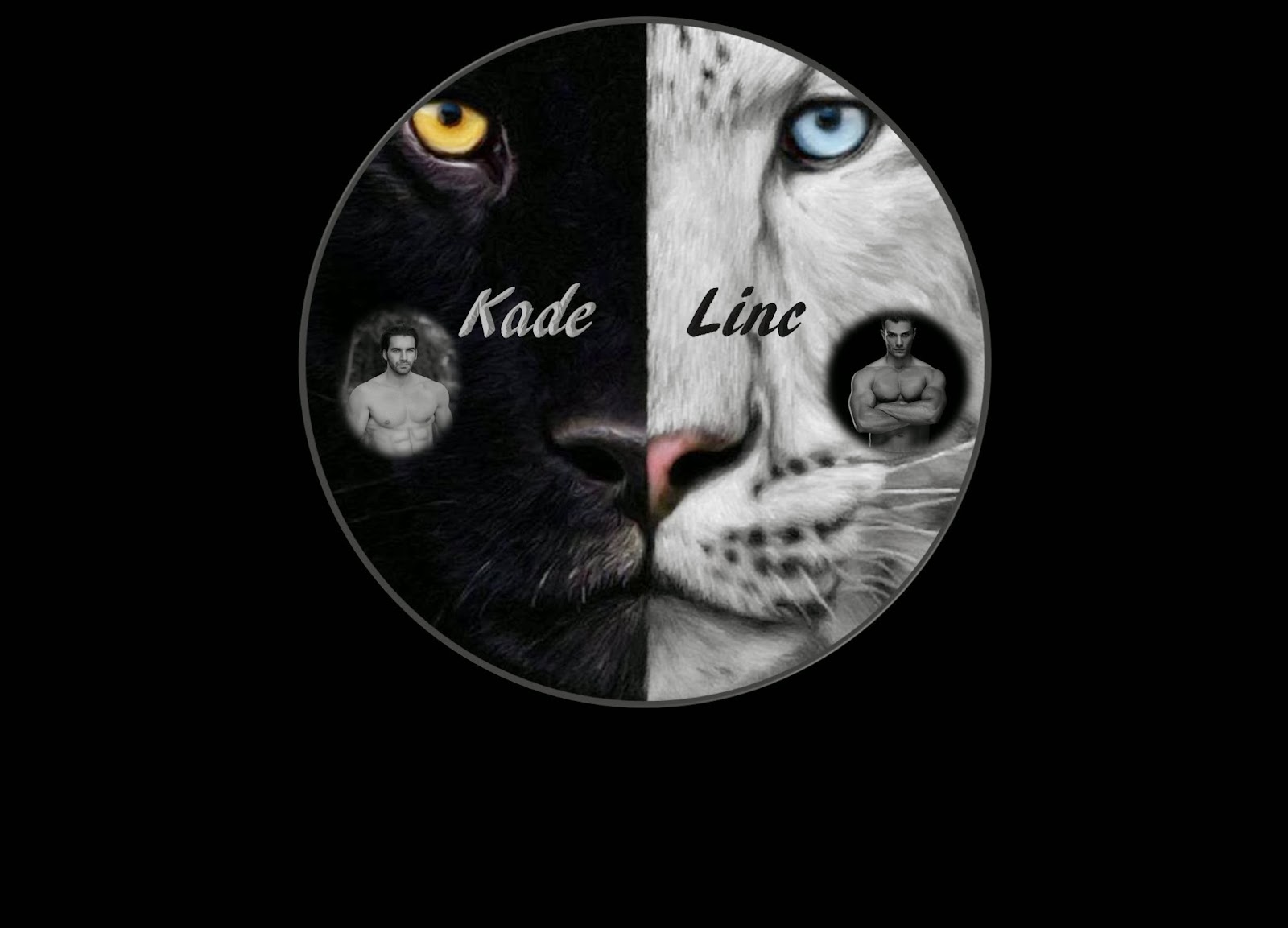 When Sloane finds herself in danger of being attacked by two mountain lions, she is rescued by two shape shifters and placed in the care of, none other than, Kade and Linc.  The connection is instant, with certain pheromones that are immediately sent out by all three whom are called by the Tri-Parenje, which is Croatian for Three mating. 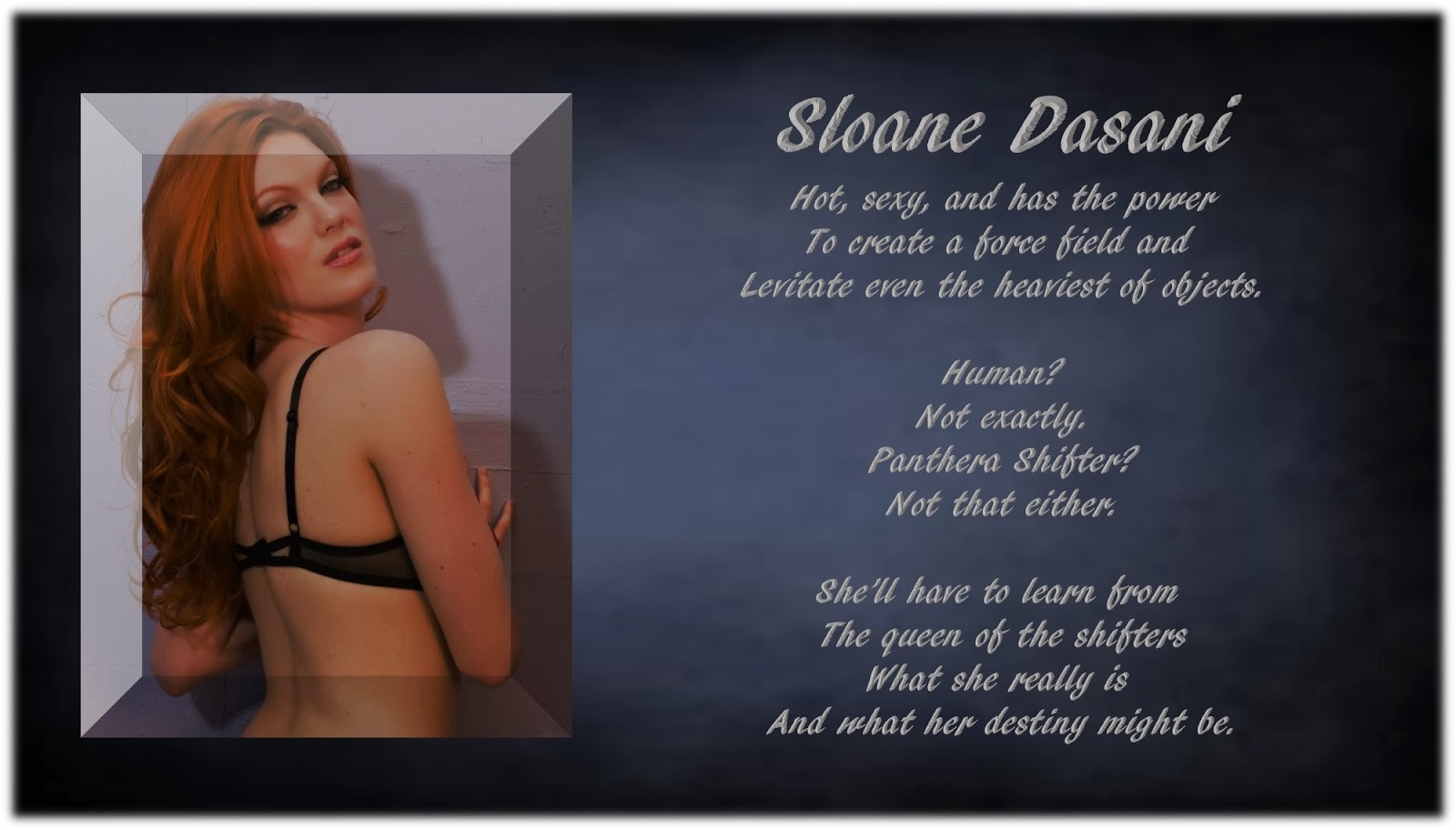 Finding their Tri-Par throws Kade and Linc off balance, as they believed the Tri-Par to be only a legend.  They know, without a doubt, what is happening to them when they are face to face with their mate.  But, Sloane has no idea what is happening.  All she knows is that she wants both of them desperately and doesn’t waste any time letting them know it.

In Guardians of the Tri-Parenje: Shadows of Ecstasy, you will be introduced to a very small part of the shape shifter’s world.  You will learn of some of the most important characters in this novella.  The Shadow Clan, which Kade and Linc are a part of, and the Thunder Clan…the most evil of the Panthera Shape Shifters.

You will also learn that the women of the Tri-Par are not exactly human.  They are magi with unbelievable powers.  Sloane’s powers will manifest in Shadows of Ecstasy, but there is so much more to her than what you will learn in the first book.  She and her two hot lovers will be a big part of Shadows of Desire, where you will also be introduced to a whole new trio of the Tri-Par. 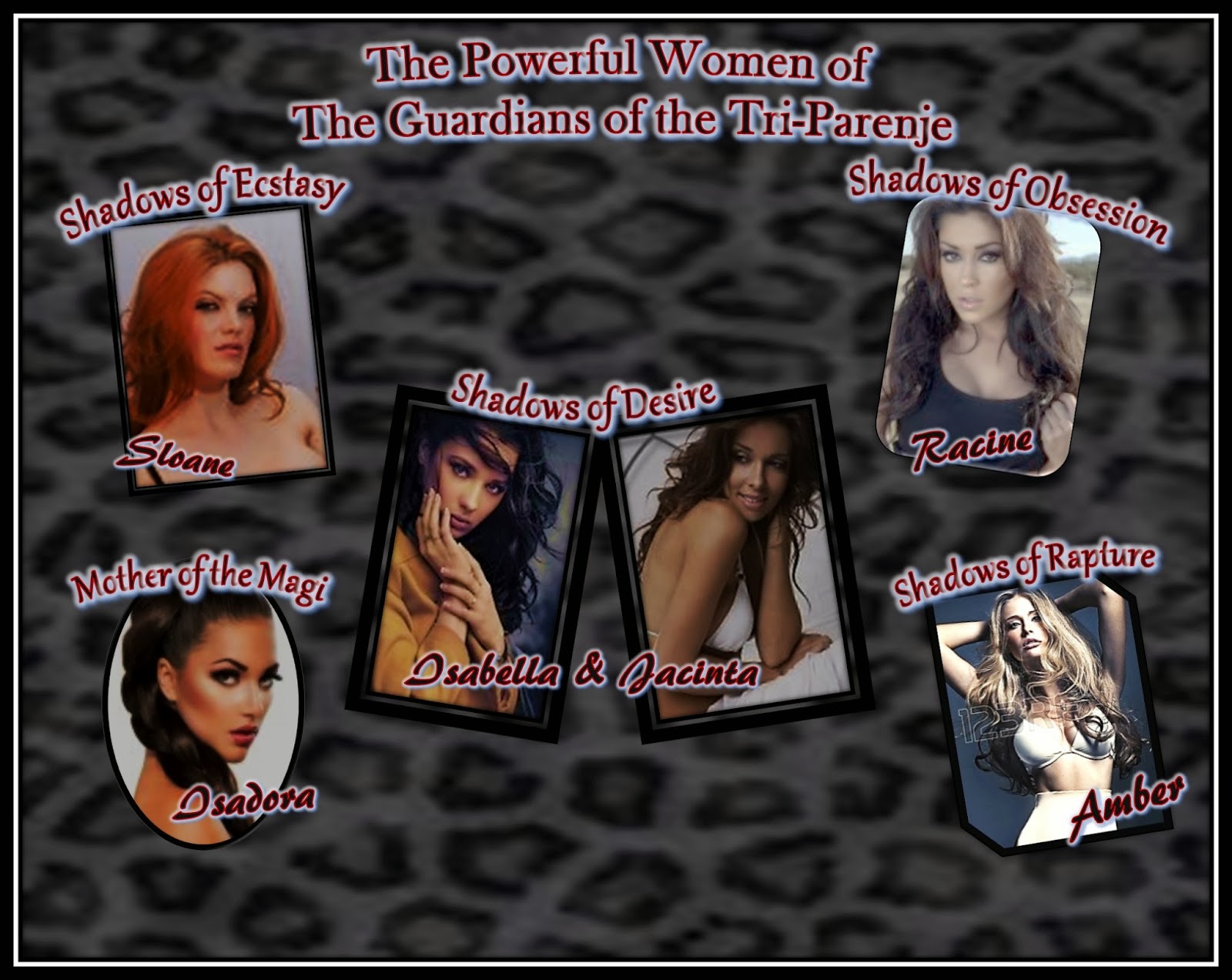 In Shadows of Desire, you will meet Isabella and Jacinta Sharriffe, Corin Kovac and Adan Vicente.  This book is my work in progress, so I can’t tell you too much at this time as it may change before it is released.  I will give more information on this trio of hotness in future posts. Just a little hint...Jacinta may find a couple of Guardians of her own in this edition of the Shadows hot and sexy tales.

In addition to the Guardians Series,
there will be short stories that are
spin offs of the Guardians books
called Dark Slayer. The first of these
shorts is available exclusively
at Smashwords. 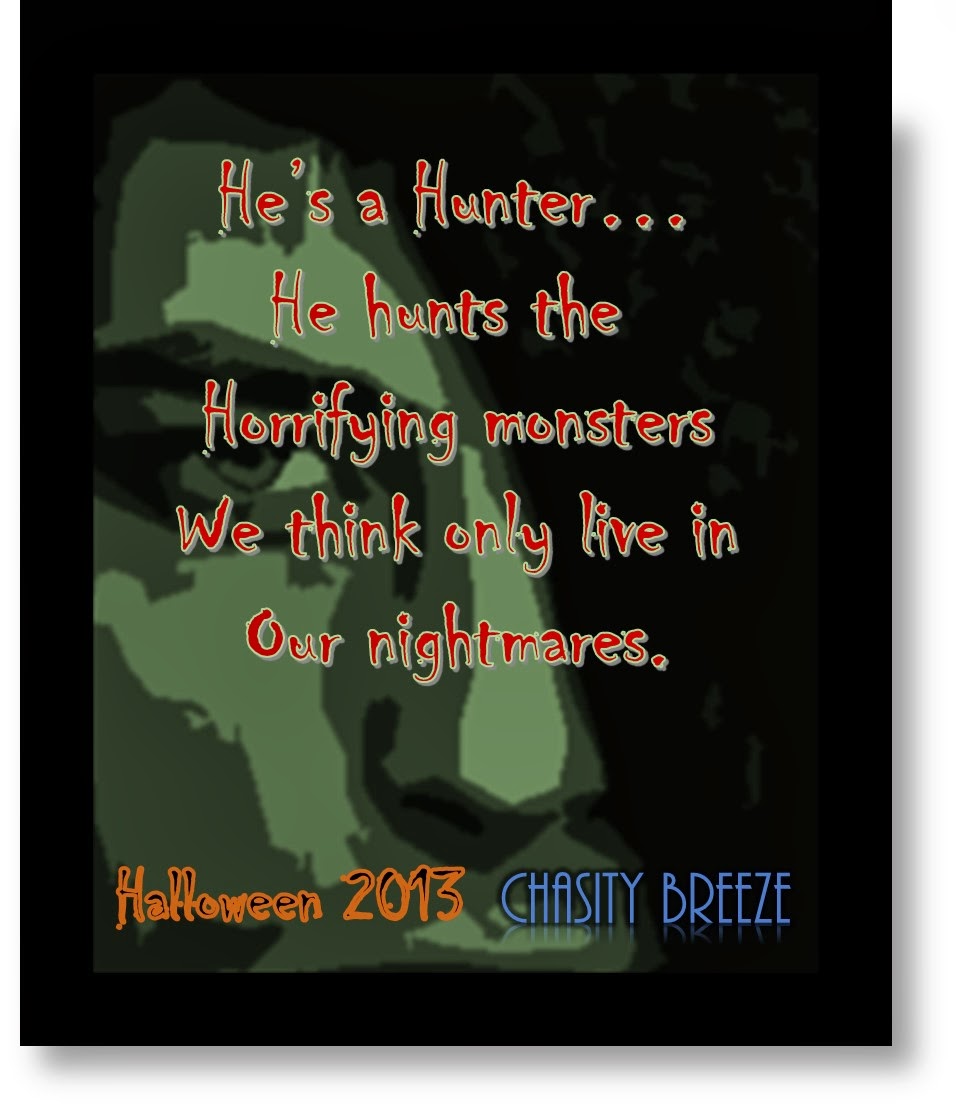 My husband, Brock, challenged me to write a story to go with the image on the cover in time for Halloween in 2013. He wanted to see just how much talent I really have. So, I jumped at the challenge to prove that I have what it takes to be a good writer of erotica. It’s short and sexy with more sex than not. A good quickie for those of you who don’t have time for more. I hope that you like what I came up with. Enjoy!

Ruger Daltry is a hunter. Not your average hunter who kills game for sport or food. He hunts the things that lurk in the night…the things we believe are only in movies or in our nightmares. He is a Dark Slayer, those who are sworn to protect mankind from the dangers of evil creatures and from the terrifying knowledge of their existence. He hunts werewolves, shape shifters, vampires and dark witches. Those who attack the mortal world with only the most evil of intentions.

During a hunt for a murderous werewolf, Ruger stumbles onto some creatures he’d never seen before, and, though he knew of mythical creature’s existence, the discovery of these excited him…in more ways than one.

Satyrs and nymphs are known to be very sexual beings. And, when Ruger comes face to face with the exotic creatures, he becomes intricately involved in their world and is erotically rewarded by Aidam, king of the Satyrs, with three nymphs for saving them from an attack of the werewolf he was tracking.

Please enjoy this free gift from me to you. I do hope you enjoy it.

Until then, enjoy Shadows of Ecstasy and occasionally some new short stories from the Dark Slayers, along with teasers from Shadows of Desire...in fact...here are some picture teasers that I can give to you. 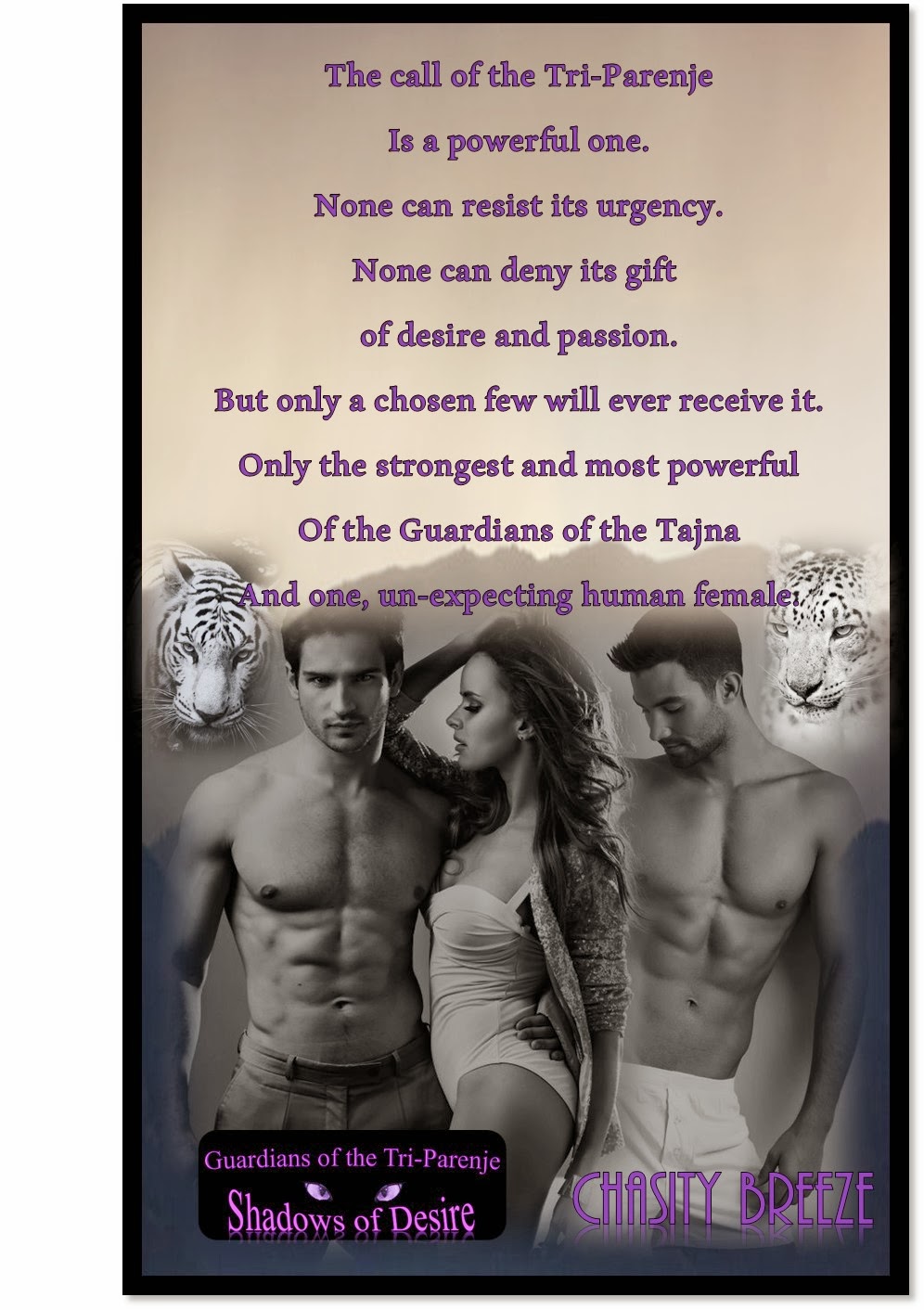 Be sure to grab a copy of Shadows of Ecstasy: 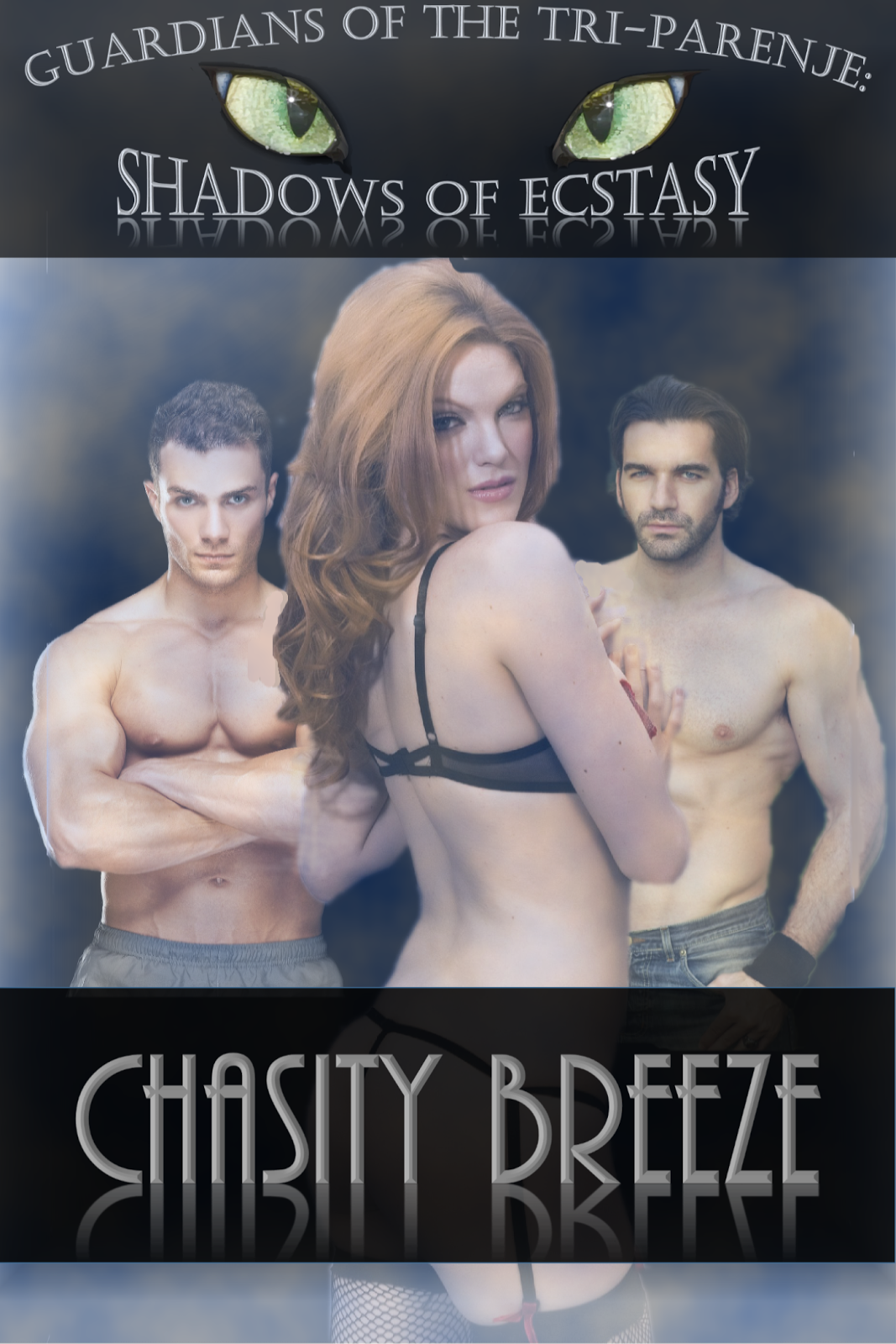 After a long stressful day at work, Sloane Dasani takes a run on the path in the park close to her home under the safe light of a full moon. But her day’s about to get a lot worse. As she runs along the path beside the woods, she hears screaming and, against her better judgment, she covertly sneaks through the trees to investigate. What she finds she's not sure she is seeing right. Two enormous cats were tearing three young men to shreds. Sloan was terrified at the sight of blood covering the ground and flying in the air. To her dismay, the large beasts catch her scent and move in her direction. She runs through the woods, trying to make it to safety, when she trips over a fallen branch. Before blacking out, she faintly hears a woman telling someone to take care of the others, that she could handle her.

Kade O'Connell and Lincoln Merrick, protectors of the existence of their kind...Panthera shape shifters, receive a call for a new assignment; to protect a witness from Karan, the alpha cat of the evil Thunder clan. To them, it's just another day at the office until they meet the redheaded beauty they are to protect. Sloan Dasani is the most intriguingly beautiful woman they have ever seen and she has some sort of hold on both Kade and Linc. Neither of them understands the magnetic pull she has on them and they can’t stop thinking about getting her into their bed, even if they have to share her.

When Sloan snaps out of her state of shock, she finds herself in a cabin hidden deep in the woods with two of the hottest guys she’s ever seen. She feels some sort of energy pulling her to them and things get hot and steamy when she finds that they want her as much as she wants them. The incident in the woods almost forgotten in the heat of the moment, Sloan submits herself; heart, body and soul to these two hunks. Their passion spirals out of control and Sloan is happy and content in her new euphoria.

But, an unknown danger lurks in the woods. A danger more powerful than Kade and Linc can handle on their own. They soon learn that their raving beauty is their "tri par", their shared mate. Not only is she bonded to them for life, but, unknown to her, she has some sort of power that hasn't yet emerged.

A visit to the clan Sage, an oracle, explains that Sloan is a key factor in a prophecy from long ago. She's the beginning of the coming of the Order of the Tri-Parenje, more commonly known as the Tri-Par. What they learn from the Sage is that they must complete the "Tri-Par" to initiate the Commencement of the Order by committing themselves to each other heart, body and soul...for all eternity.

Sloan has to make the decision to stay and begin the new order freely. But, she's unsure of what she wants. She wants Kade and Linc, but she must sacrifice her old life for the new. And, to be part of a coming war? She's no soldier and is against war altogether.

Will Sloan decide to stay with these two hot hunks, who promise to make love to her every day and night for the rest of her life? Or will she turn tail and run from the fear that haunts her?

Thanks for stopping by and Shooting the Breeze with me!

Loves and kisses…in all the right places.

Braxton Cole, Sarah Daltry and myself are Crashing the Party!! Come join us and become a Crasher too!!

Guardians of the Tri-Parenje: Shadows of Ecstasy

Swingers: Our First Encounter of the Naughtiest Kind